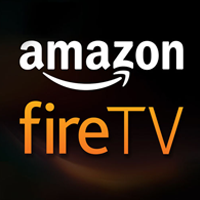 Amazon Fire TV (stylized as amazon fireTV) is a line of digital media player and microconsoles developed by Amazon. The devices are small network appliances that deliver digital audio and video content streamed via the Internet to a connected high-definition television. They also allow users to access local content and to play video games with the included remote control or another game controller, or by using a mobile app remote control on another device. The device comes in two form factors: Fire TV Cube, a set-top box with embedded Amazon Echo smart speaker (which effectively replaced the original, discontinued Fire TV box models) and the Fire TV Stick, an HDMI plug-in stick with lesser specifications than the contemporaneous generation boxes. The first-generation Fire TV device featured 2 GB of RAM, MIMO dual-band Wi-Fi, and a Bluetooth remote control with a microphone for voice search. It supported 1080p streaming and Dolby Digital Plus 7.1 surround sound but was dependent on internet bandwidth of the user. Unveiled on April 2, 2014, the Amazon Fire TV (1st Generation) was made available for purchase in the US the same day for US$99 and was launched with a video game called Sev Zero. The second-generation version was released in 2015, adding 4K resolution support. In September 2018, Amazon announced the Fire TV Recast, a digital video recorder which works with an HD antenna to record shows for later viewing on a Fire TV or an Amazon Echo Show device. It is designed for use with over-the-air TV services and is a part of the cord-cutting movement.