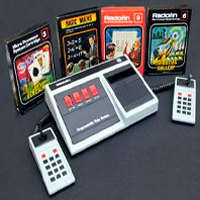 The 1292 Advanced Programmable Video System is a home video game console released by European company Audiosonic in 1978. It is part of a group of software-compatible consoles which include the Interton VC-4000 and the Voltmace Database.
Both, the VC 4000 and the 1292 APVS, are built around the Signetics 2650 microprocessor, which was released in late 1975. That was around the same time when Philips had bought the Signetics company and shipped the technology over to Europe. At that time Philips' subsidary Magnavox was developing a system based on the arguably more powerful Intel 8048 microprocessor - that system would later become known as the G7000 (or Odyssey² in the USA). Having one hardware product already in development, Philips decided to treat the Signetics 2650 as commercial product, targeting small-sized electronic-manufacturers, who were already swarming the market with PONG-clones.

More evidence to support this hypothesis is provided by a Swedish TV broadcast from April 1979, when a team from SVT (Swedish broadcast company) visited the Philips-reasearch-centre in Eindhoven, Netherlands to talk about the future of video games. Throught the video the developers are seen with VC 4000 controllers, testing game prototypes which graphicly correspond with games on the VC 4000/1292 APVS and not Philips' own home console, the Videopac G7000.
The misconception that the 1292 APVS was released already in 1976 is probably owed to the - by now viral - misinformation that Radofin (the most prominent 1292 APVS manufacturer) released its first cosoles in 1976. These, however, were no microprocessored early wonder-machines, but plain PONG-clones.