Well, it's better than nothing

After initial rumours in the Polish press in July, developer Techland rather randomly confirmed Dying Light Platinum Edition for Nintendo Switch at the end of a Gamescom presentation of its sequel. It was a blink and you'll miss it reveal, but was pleasing nonetheless as the original has plenty of fans on PS4 and Xbox One.

Today the publisher has continued its rather unconventional marketing for the Switch iteration by releasing the 'manifesto' video above, which outlines the key methods of survival when parkouring and fighting zombies. It ends by saying it's 'coming soon'.

The press release isn't much more enlightening, but does confirm there'll be motion control support and seemingly HD Rumble, too.

Agnesa Belegu, lead game designer of Dying Light, said, "We've been imagining Dying Light on the Nintendo Switch for a very long time. Getting into the free-flow of parkour and exploring our deadly open-world has never been more of an adrenaline rush. The flexibility of the Switch helps to immerse you into our world and makes you feel physically involved in it, with the flow of movement and visceral combat enhanced by the dynamic haptic feedback and motion control."

As you can see in the previously released graphic below, the physical retail edition will have some nice goodies. This version is also expected to follow the PS4 / Xbox One equivalents and include four DLC and 17 skin bundles, so there should be plenty to dig into. The previous reports in the Summer also stated it'd arrive in October - which makes a lot of sense - so we'll see if Techland confirms a date soon. 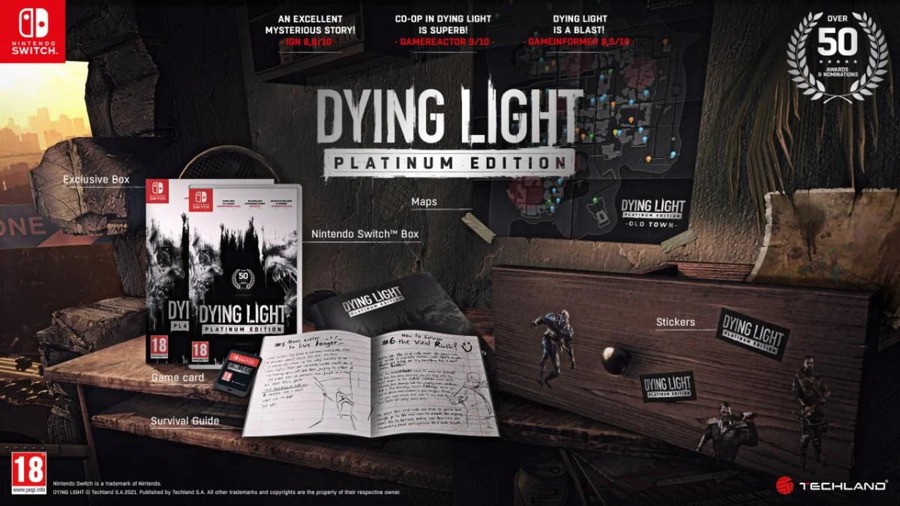 During today's Nintendo Direct there was an appearance for Dying Light Platinum Edition, with a 19th October release date confirmed.

While the first game is a port, sequel Dying Light 2: Stay Human - Cloud Version was announced for 4th February 2022, so for those willing to stream it'll be an option to experience the flashy new arrival on Switch.

Are you planning to pick up Dying Light Platinum Edition on Switch?