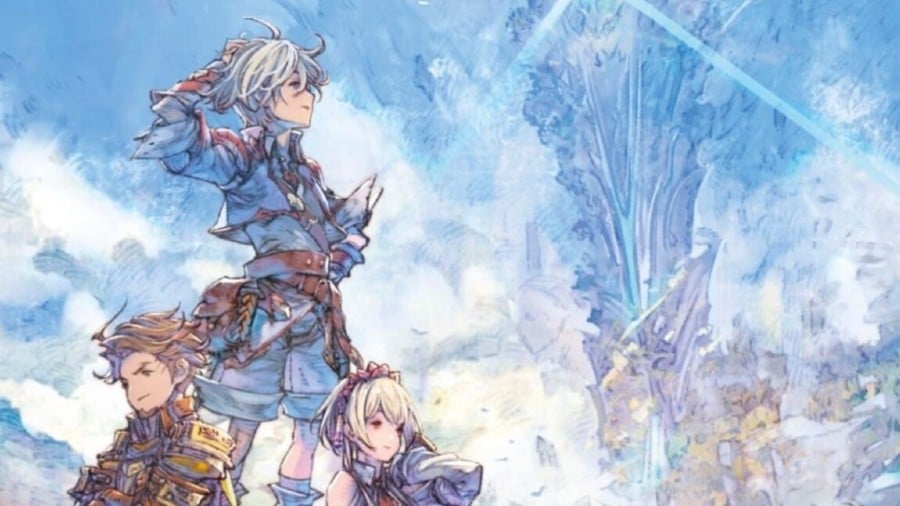 Update [Mon 23rd May, 2022 15:30] Oopsie! Biccamera, an electronics retailer in Japan, has accidentally revealed PROJECT-TRITRI ahead of schedule. The game was originally going to be unveiled by FuRyu on 26th May, but in a slip-up, the Japanese retailer have confirmed the name, the release date, and a bunch of screenshots

'Project' has been dropped from the name, and we now know the game is going to be called Trinity Trigger. The game will launch on PS5, PS4, and (most importantly) Switch on 15th September in Japan. When we'll get it in the West, we have no clue yet, but hopefully it won't be much longer after!

Gematsu has gathered together a full summary of the game from the store pages, right before the listings were taken down (thanks, Gematsu!). Here's everything we know about Trinity Trigger so far:

A 90s era traditional RPG experience for the modern age.

A completely new title from developers who have previously worked on traditional fantasy RPGs.

A story about a young man caught up in fate who will save the world. The excitement of exploring fields and discovering treasure. And action-based gameplay in which you pave your own path to victory.

This is a straightforward fantasy RPG like never before—for those who were once children and have now grown up, and for the children of today—playable alone or with others.

Great weapons fell to the land, and the world began to collapse.

Each God chose a proxy—a “Warrior of the Gods”—and it was decided that a winner would be determined by the battles between warriors.

And so time passed…

Cyan, a young man living a quiet life in a small village, one day learns that he is a “Warrior of Chaos” chosen by the Gods. Burdened with a cruel fate, he sets out on a journey to fight against destiny with Eris and Xanthys, who joined him as if guided to him.

Together the three can change their fate… So it is believed…

- Classic Isometric Action for the Modern Age – Classic isometric action with a 90s era feel, polished for the modern age.

Feel Excitement, Elevation, and Tension through Three Concepts of Discovery

- Discovery in Battle – Fight in action-based battles by switching between a total of eight weapon types using the “Ring Change” system. Victory is determined not only by finding the enemy’s opening and circumstance, but also by using the weapons they are weakest against. Enjoy a battle style all your own by putting together your own combos, weapon upgrades, and effects.

- Discovery on the Field – With more than 60 area maps—including lush forests, forests with glowing mushrooms, snowy mountains, deserts, ice, and fire—with numerous treasure chests, cuttable weeds, breakable rocks, and paths not obvious at first sight, dungeon exploration offers an endless sense of discovery. Tons of diverse mechanics will ensure you not travel each map on a linear path.

- Discovery in Towns – There are plenty of discoveries to be made via the people you meet in towns. You may even uncover treasures by talking to them. To discover the truth of this world, it is essential to hear out the stories of its oppressed people.

With some beautiful-looking art, which we've already seen down below, we've also got a really good look at the game down below. It looks and sounds like it'll be an adventure-focused top-down action RPG. There's even something that looks like the item wheel from Secret of Mana!

We'll see if FuRyu gives us any more juicy details prior to, or on, the game's official reveal on 26th May. 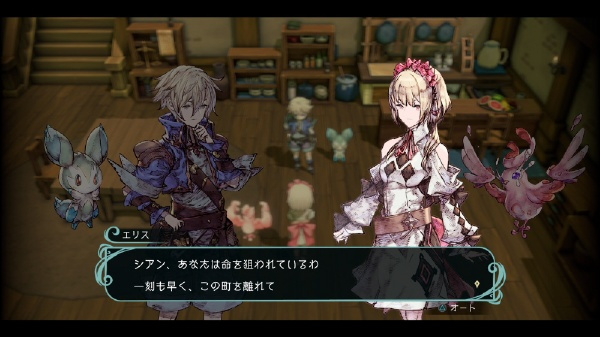 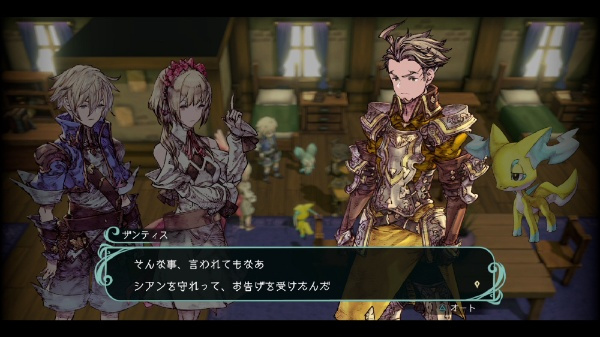 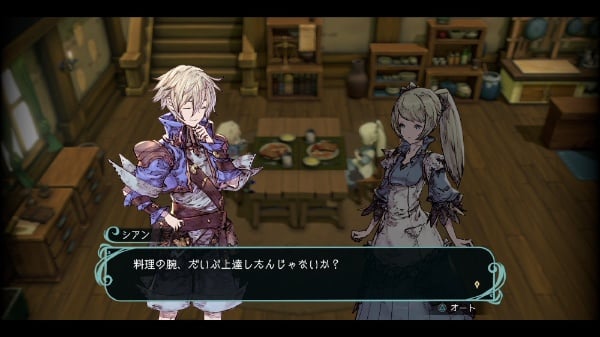 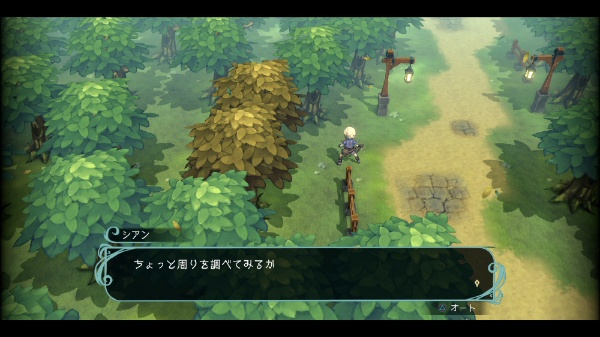 Original article [Fri 20th May, 2022 11:15 BST] Japanese publisher FuRyu — known for bringing us RPGs The Alliance Alive, The Caligula Effect, and Monark — has launched a countdown for a brand new action RPG, PROJECT-TRITRI. Obviously that's not going to be the final title... unless FuRyu is going for Project Octopath Traveler and Project Triangle Strategy vibes.

The game is currently in development by Three Rings, who has worked on the wholesome Story of Seasons: Pioneers of Olive Town. We won't find out much more about the game until 26th May, but we know it's coming to Switch (and PlayStation 4 and 5) and is aiming for a Q2 2022 release date, which is *checks calendar* pretty soon! The week wait might be a bit agonising for JRPG fans, but we have a few teasers to get us even more excited. All of the information we've included below has been translated by Gematsu — so thanks, Gematsu!

So, let's start with the first bit of info, which is pretty darn tantalising in and of itself. There's a bumper list of RPG veterans working on this upcoming project, with names from the Mana series, Pokémon, and Xenoblade!

Atsuko Nishida, Tomohiro Kitakaze, and Megumi Mizutani — all artists on the Pokemon series — are also confirmed to be working on some kind of creature designs for the game, ones that transform into weapons to help out the person who has summoned them.

The other nugget (though calling it a nugget doesn't do it justice) is a confidential game proposal document. You can read the whole thing right here if you understand Japanese, but we've grabbed a few of the most important details we think you'd like to know about!

Starting with the concept, the developers wanted players to capture the feeling of "excitement, elevation, and tension" and revive "90s era of RPG classics for the modern age" that you can play "by yourself or with everyone". You'll be able to play the game with up to three people (there's your tri reference for you), so perhaps there are three party members? We're just excited about getting another multiplayer RPG.

The story is next on the docket, which sounds like an RPG story, for sure! But look at the art — these early glimpses at the game look absolutely lovely. 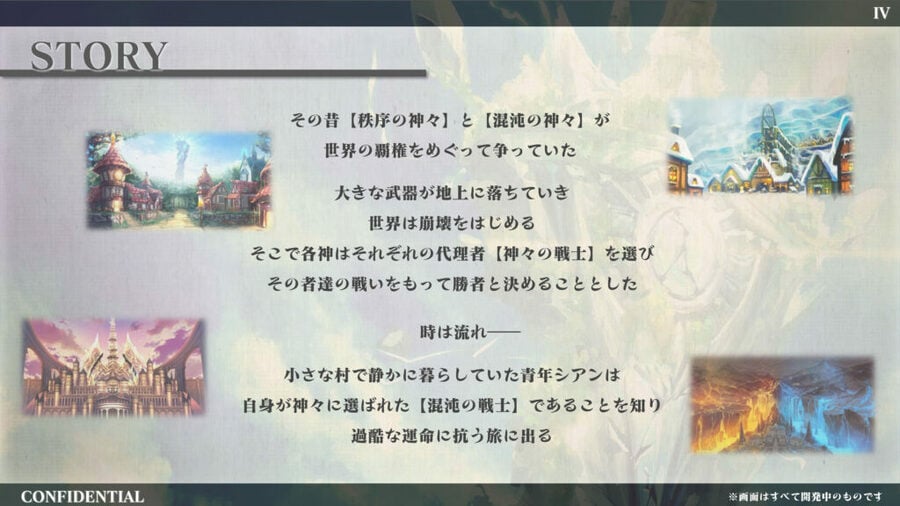 Great weapons fell to the land, and the world began to collapse.

Each God chose a proxy—a “Warrior of the Gods”—and it was decided that a winner would be determined by the battles between warriors.

And so time passed…

Cyan, a young man living a quiet life in a small village, learns that he is a “Warrior of Chaos” chosen by the Gods, and sets out on a journey to fight against his cruel fate.

For our money, RPGs called Cyan often have a pretty rough time — looking at your Final Fantasy VI — so we'd like to caution the warrior. But we'll take any change to punch God in the face.

Now let's have a look at some concept art of the characters, which are absolutely in Raita Kazama's style. A little bit of Xenoblade with some more Octopath-style armour? We're in. 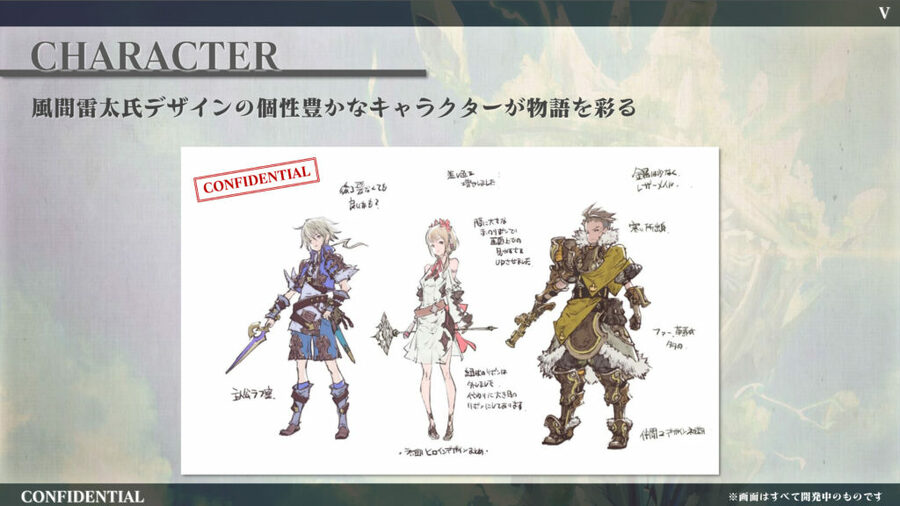 Some lovely concept art, a great cast list, and an intriguing premise? We're looking forward to finding out more about PROJECT-TRITRI next week. Don't forget, the countdown ends on 26th May at 3am PDT / 6am EDT / 11am BST / 12pm CET.