R-Type may be 34 years old but the beyond-enthusiastic reception for R-Type Final 2's Kickstarter proved Irem’s long-running series is much more than a nostalgic memory held close by a few greying fans, or vintage shmup still hazily respected from a great distance. R-Type can still generate hype and open up wallets; the thought of more was enough to see the game’s Kickstarter campaign raise double (and then some) its initial funding goal. The series is an evergreen classic and rightfully so, and one that has at times made a happy home for itself on Nintendo hardware, with the arguable highlight landing on an unexpected format: the humble Game Boy Color.

1999’s R-Type DX was an ambitious project from the start, cramming the two original Game Boy ports into one cartridge and not only colourising but also enhancing both (make sure you take a minute to enjoy the new and more arcade-accurate intro used in the colour version of R-Type II), and then combining these new portable takes on two arcade legends into one epic shmup package. DX never aimed to be anything less than the most definitive handheld experience you could possibly have with these titans of the genre; a small squarish black cartridge that left you wanting nothing else other than an infinite supply of AA batteries and a long sunny day.

You’d probably expect a project of this quality to come from a fiercely dedicated team of Game Boy enthusiasts at Irem determined to release this unrealistic passion project no matter the cost, but in reality a small group of supremely talented people working for UK developer Bits Studio (the same developer responsible for the original “impossible” R-Type ports created for the old monochrome Game Boy) were solely responsible for this portable wonder. 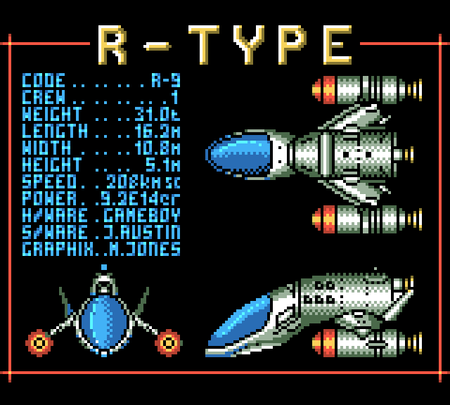 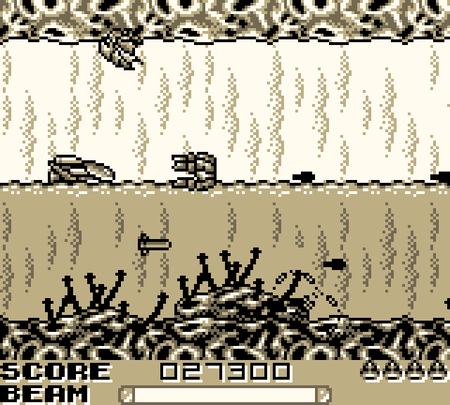 So what? you might ask. We all know what R-Type looks like in colour — it looks like every other version of R-Type ever made! — so why would a portable version be anything special?

Context is key here. Back in 1999 the Game Boy Color wasn’t just a colour Game Boy; it was the most powerful handheld Nintendo had ever released and the only handheld worth owning. It was far from the bleeding edge of console technology, but its vast library and brand power made it the must-own portable machine, despite a couple of valiant efforts from other companies. Truly arcade-accurate R-Type was something you’d find only in an arcade, not emulated on your PC, or downloaded onto your phone (if you even had one), or anywhere else outside of the uncommon PlayStation retro package, R-Types. That's what made this GBC package so astonishing. 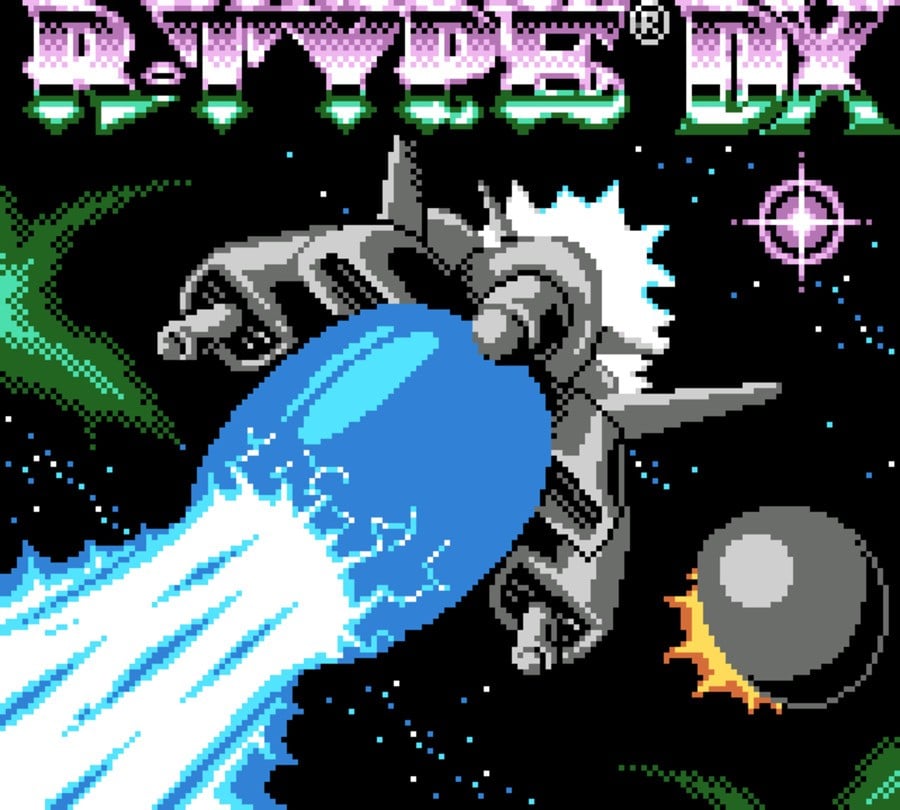 The graphical upgrade in R-Type DX adds not only colour but also contrast and readability. Enemies and your own bullets are no longer different shapes moving in opposite directions but blues and oranges against blacks and greys. The iconic orange Dobkeratops and its tangle of wires waiting at the end of the first game’s first stage stand out against the deep black background and the claustrophobic stage walls. Colour breathes an uncomfortable sort of life into the bio-mechanical horror festering within R-Type’s dark heart, subtly emphasising the wrongness of shooting your way through alien graveyards and forbidden landscapes; the blood red organic structures of one stage feeling very different to the greens and blues of metal and technology found in another; lush green trees making the rusted metal you flew through earlier seem like forever ago — and this all playing out right in the palm of your hand, wherever you happen to be.

And this is where we find another of R-Type DX’s quiet triumphs: an acute awareness of its new portable home. The traditional tap-to-shoot / hold-to-power-up a Bydo-beating blast firing method is included if you want to use it, but there are also two different types of thumb-saving autofire to choose from, too — very much appreciated on a format where excessive tapping inevitably wobbles the screen. Per-game difficulty settings are available as well, allowing you to tailor every version of every game to your liking.

On top of that DX also silently tracks of your progress and keeps it safe on its battery-backed cartridge, enabling you to restart a colourised title from the last stage you reached or simply practise a tricky level in preparation for that perfect no-death run you’re sure you can do… one day. It’s an R-Type that knows you may have to put it down at any moment even if you don’t want to; an R-Type that gives you the ability to get back into the action as quickly as possible without any of the games ever losing their unforgiving edge or strict checkpoint-based restarts. 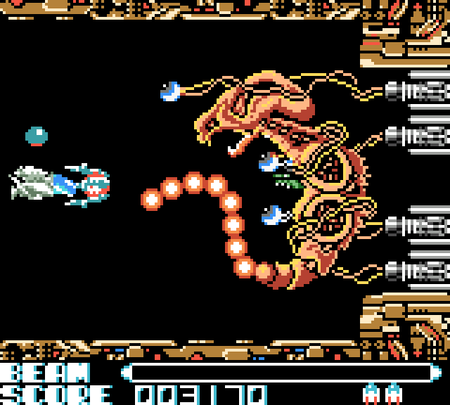 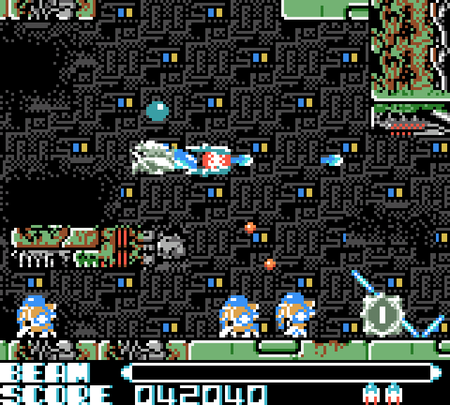 It’s also an R-Type that gives you a rare taste of the hardest challenge of all — creating something of your own. The “De Souza” editor, only available to those who’ve shown a thorough mastery of everything R-Type DX’s has to offer, allows you to feebly attempt to construct something of your own from the game’s selection of pre-existing graphical tiles before giving up and going back to any of the other modes. This is intended to be a welcome little bit of extra fun rather than Irem-themed Dezaemon (although we’d love to see that too), and a chance to see for yourself just how much of a headache it can be to design anything, never mind a recognisable recreation of two arcade classics, within such stringent hardware limitations.

In the 22 years since DX dropped our general expectations of retro re-releases have inflated to the point where “arcade perfect” is now considered the very least a port could be, and this is why arcade R-Type is now something of a quaint bonus in its own remake, R-Type Dimensions EX. These new higher standards make it easy to pick fault with this Game Boy offering (there are entire levels missing in this handheld port, after all) but — and this is the most important part — the feel of the games in this collection really can’t be faulted. DX is R-Type distilled rather than damaged, a fully-featured and incredibly playable demake that holds up beautifully, even when viewed in the harsh light of modern day (which is exactly what you’ll need to see the game if you’re trying to use an unmodded Game Boy Color in 2021).